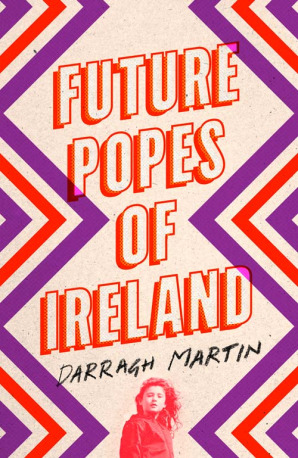 Future Popes of Ireland, my first novel for adults, will be published by Fourth Estate on Thursday August 23rd 2018. Here are some lovely reviews already in:

“The Dublin author’s ability to write with heart, humour and recognition make for an engrossing novel that tackles everything from religion to abortion, contraception to gay rights, the Fianna Fáil tent to the recession. That Martin manages to do this without ever sounding preachy shows his immense skill as a storyteller…Epic in scale and a pleasure to read, Future Popes of Ireland will have no problem finding its congregation.

Darragh Martin’s family history is set within Ireland’s see-saw social and political climate from the 1980s up to 2011. A sharp chronicler, you can practically smell the past as it wafts up at you from his pages. And while there’s tragedy, and outrage, too, there’s whipsmart satire and riotous comedy alongside a type of scholarliness that provides this novel with its zest and ingenuity. Think Zadie Smith. But much funnier.”

“It could be the story of any Irish family: the rifts that open up between people, and the silences that stand in the way of their reconciliation. Like so many of the stories that Irish people tell, it’s highly entertaining, clever and funny. It’s also, on another level, not funny at all.”

“When the zealous restrictions are worn away and no longer there to prevent people being who they need to be, what is left? In Future Popes of Ireland, the answer is an untidy and achingly human mixture of shame, love, and apologies that don’t need to be uttered aloud. A meander through loves and lives and consequences brings us to this realisation. Stylish verve – short chapters (some abruptly so), structural playfulness – and astute characterisation piled on over decades, complete the effect. Martin’s novel never sits still. Things are always changing and always the same, much like the nation that plays a starring role in it.”

(Hilary A White, The Irish Independent)